YOU CAN HAVE YOUR DOUGHNUT AND SPIKE IT TOO ON NATIONAL APPLE CIDER DAY, NOV. 18TH

While it may seem like there’s a foodie holiday for everything these days, National Apple Cider Day is one to definitely celebrate this year. To do so, you could grab a freshly-picked apple from a local orchard, or you could opt for the Angry Crisp Doughnut. Yes, that’s right. A perfectly sweet and soft twist on the classic apple crisp in a doughnut! It’s also made with a touch of hard cider, now we’re talking. Infused with Angry Orchard’s flagship cider style, Crisp Apple, the Angry Crisp Doughnut’s crumbly, crunchy topping, and warm doughy inside is the ultimate swoon-worthy treat. 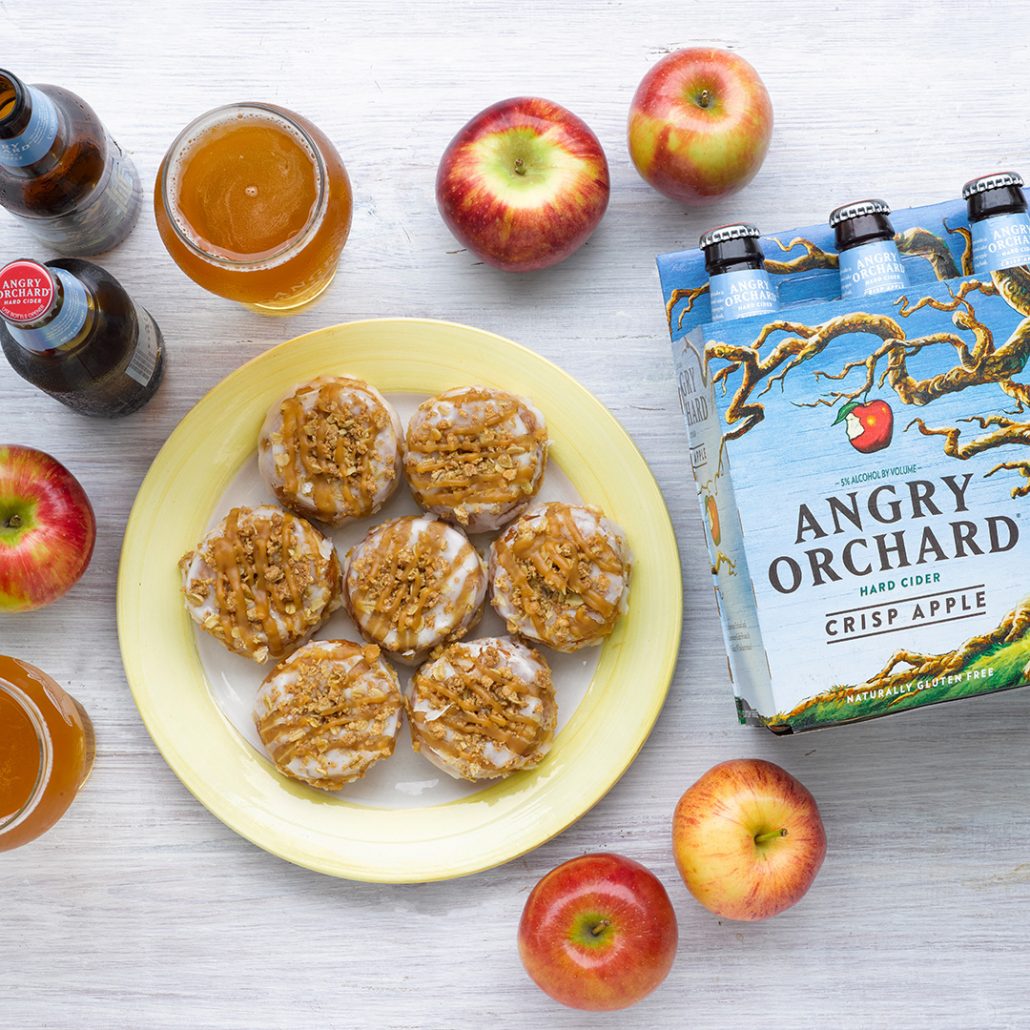 To celebrate National Apple Cider Day, the doughnut creation will be available for a limited time, Friday, November 17th – Sunday, November 19th at The Doughnut Project’s West Village location and at Angry Orchard’s Cider House at the Angry Orchard in Walden, New York on Saturday, November 18th. For folks who won’t be able to make it to either of these locations, Angry Orchard and The Doughnut Project are sharing the recipe for home bakers around the country, encouraging them to share their very own Angry Crisp creations on social media, tagging @AngryOrchard and using the hashtag #AngryCrisp.

“Everyone enjoys a refreshing hard cider paired with their favorite doughnut, especially during the fall,” said Ryan Burk, head cider maker at Angry Orchard. “So for National Apple Cider Day, we wanted to bring the pairing to life with our cider, giving people yet another unique way to experience Angry Orchard and celebrate the season.”

The cider makers at Angry Orchard are constantly experimenting with new styles, blends and techniques to continue to push the craft of cider making forward, to ultimately create new ways for drinkers to experience all that cider can offer. Similarly, The Doughnut Project is well known for their small-batch, innovative creations and playing with unique flavors.

“We have a true passion point for creating unique, unexpected and delicious recipes,” says Leslie Polizzotto, Co-Founder of The Doughnut Project. “The Apple Crisp is such an iconic fall dessert and we wanted to give people a taste of it like they’ve never had before. The hard cider in this recipe provides the perfect amount of juicy fresh apple notes that balance the doughnuts’ sweet crunchy goodness.”

About Angry Orchard Cider Company:
Angry Orchard Cider Company’s cider makers have been experimenting with apple varieties and unique flavors to develop hard cider recipes for 20 years. The cider makers have travelled the world to find the best apples for cider making and chose specific varieties, like French bittersweet apples from Normandy and culinary apples from Italy and the United States, based on each cider’s flavor profile. In November 2015, Angry Orchard established a home for cider research and development called the Cider House, located on a historic apple orchard in the New York Hudson River Valley. In May 2016, Angry Orchard planted three acres of traditional cider-making apples at the Orchard that they will use for research and experimentation at the Cider House.

Angry Orchard makes a variety of year-round craft cider styles, including Angry Orchard Crisp Apple, a fruit forward hard cider that balances the sweetness of culinary apples with dryness and bright acidity of bittersweet apples for a complex, refreshing taste. Despite the recent growth of hard cider in the U.S., the category is still small and relatively unknown. Angry Orchard is committed to drinker education and awareness-building to help grow the category for all craft cider makers.

About The Doughnut Project:

The Doughnut Project is a small-batch, hand-crafted doughnut shop located in the West Village of Manhattan. The shop combines some of the best doughnuts in America with an upbeat, artistic vibe. The shop’s co-owners Troy Neal and Leslie Polizzotto create unique flavors inspired by the amazing food and creative cocktails of New York City. The yeast-raised doughnuts have glazes, fillings, and toppings that include out-of-the-box ingredients such as bacon, beets, olive oil, ricotta cheese, sesame seeds, black pepper and sea salt. The shop creates new and intriguing flavor profiles on a regular basis and sells out daily.

To find where Angry Orchard hard cider is served near you, visit the “cider finder” at http://www.angryorchard.com/cider-finder. Cider lovers can explore the Orchard online atwww.angryorchard.com/our-orchard and like us on Facebook, Instagram and Twitter @AngryOrchard.

To learn more about The Doughnut Project, visit http://www.thedoughnutproject.com/.

Seven Top Chefs from Across the Hudson Valley...

2019 ArtsBash Scheduled for May 16 at ArtsWestchester