Donna Monaco Olsen, coordinator for the Taste of Westchester Continuing Education program here to share some “foodie” news about one of this program’s participating restaurants. Cedar Street Grill is located in the Dobbs Ferry downtown offering fresh comfort food with many interesting twists. Chef Matt Kay’s passion for creating specialty dishes began as he watched his grandmother (a former restaurateur herself) cook Italian delicacies. At his restaurant, celebrating their 5th anniversary in July, he treats everyone like family. His menu is more mature after 5 years and shows his range of talent. Watch for upcoming specials to help them celebrate this most momentous milestone.

With CSGs debut of dishes with a lighter twist we can begin to taste the joys of summer in the air! The spring menu has us ready for long summer days and the taste of freshly picked ingredients. We know that those hot summer nights are just around the corner. Pick up dinner to go before heading to the river for one of the local jazz concerts held at the newly appointed waterfront park. Then head back later to partake in $1 Oyster Wednesdays. 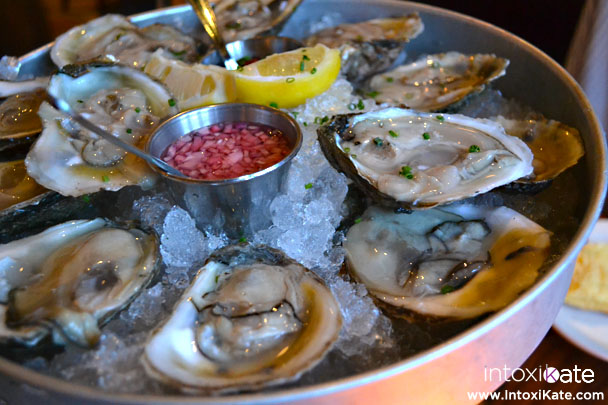 Enjoy them with one of the new and creative cocktails from CSG’s mixologist, Michael Gonzalez, who hails from X20. CSG makes a “sweet tea” consisting of Oola bourbon, Merlet peach liqueur, St. Germain, with a twist of lemon that will be a “go to” drink on the hottest of days. We tried a purple hued cocktail simply called “Black 75”. In-house, he purees spectacular blackberries with a touch of simple syrup to color and flavor this refreshing beverage. Mixed with Veev Acai Spirit and Prosecco and nicely rimmed with lime zest to offset the sweetness of the berries. Since this beverage is filled with antioxidants, can we can dub it a health elixir? 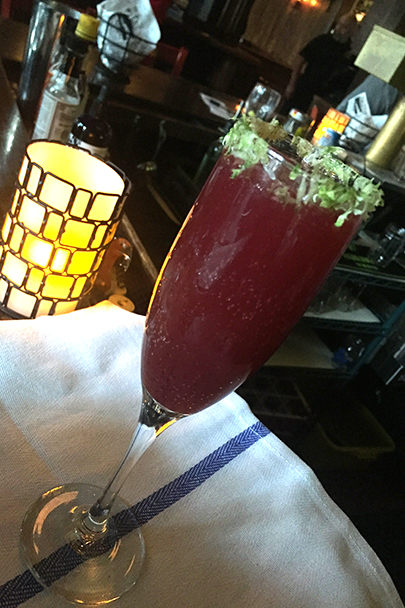 Enjoy this peek at their newest and lighter menu offerings. 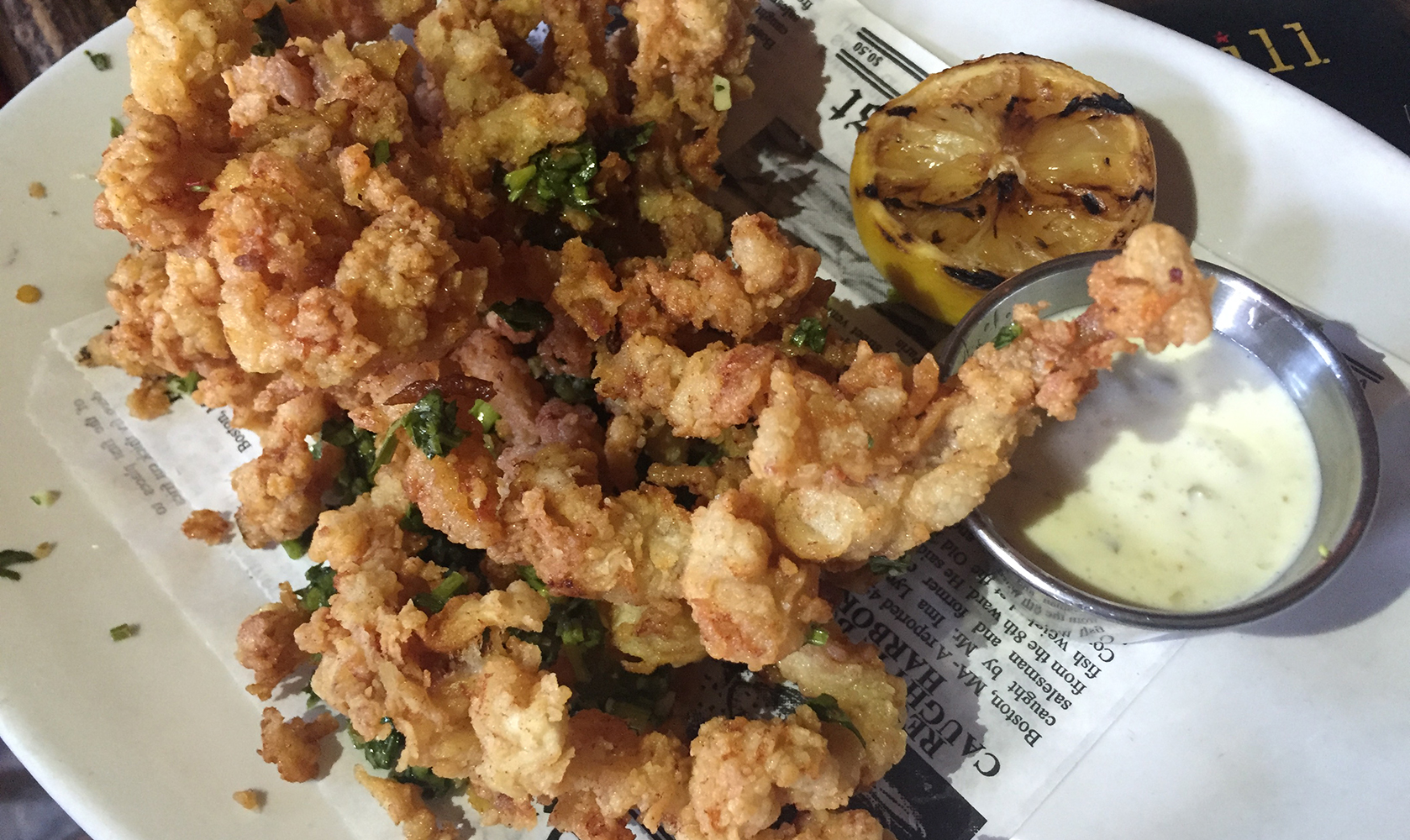 Another summertime favorite remaining on the starter menu is the fresh shucked clams soaked in brine, then flour dusted and flash fried to a crisp yet still moist treat. They are accompanied by a house-made tartar sauce, then topped with a lemon and herb gremolata for an ocean fresh taste. 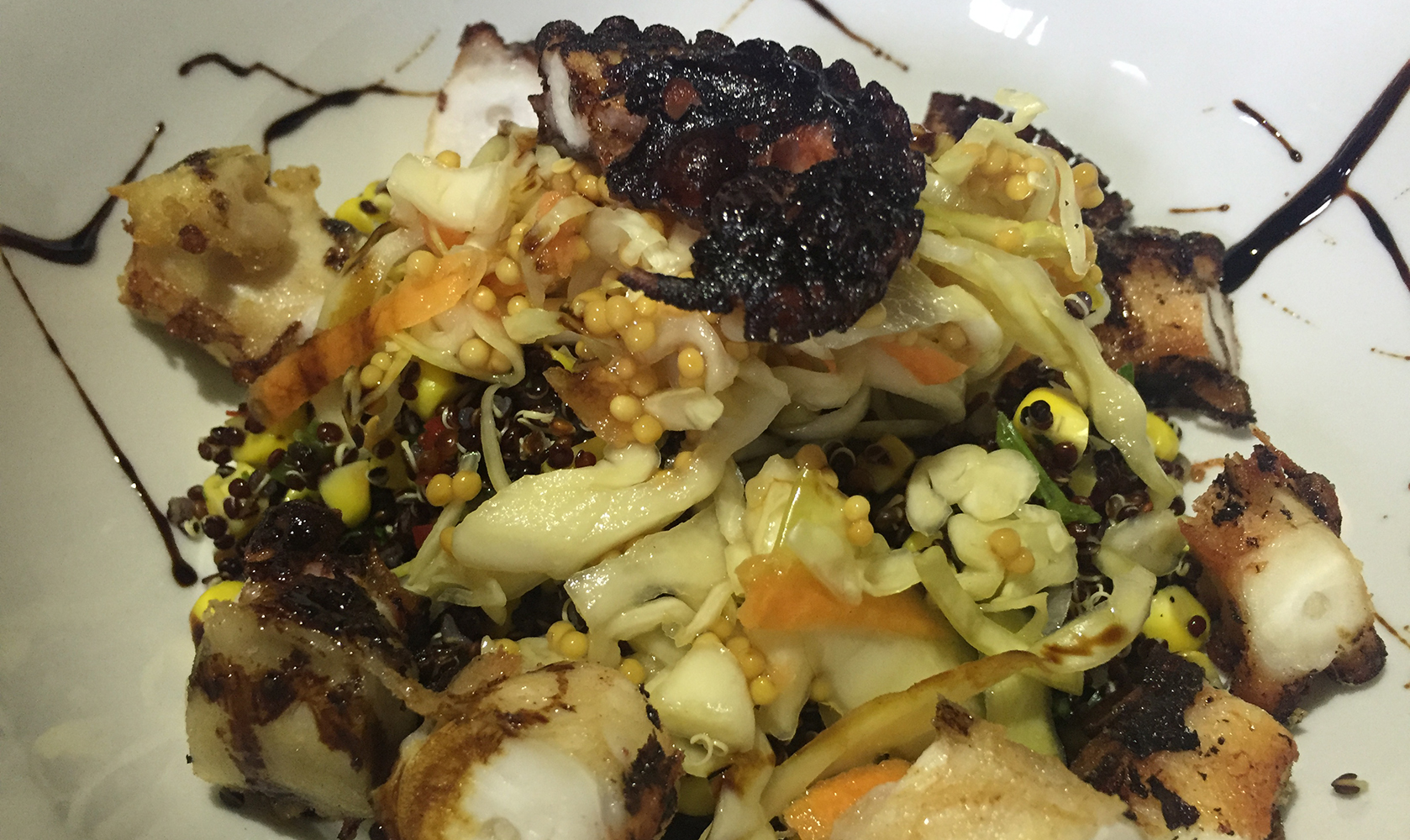 Grilled octopus was previously an occasional Special, but due to popular demand it is now on CSG’s warm weather menu. It has been revamped for an even lighter feel, served with black quinoa, sweet fresh corn kernels and pickled cabbage for an acidic bite to offset the grilled tentacles. 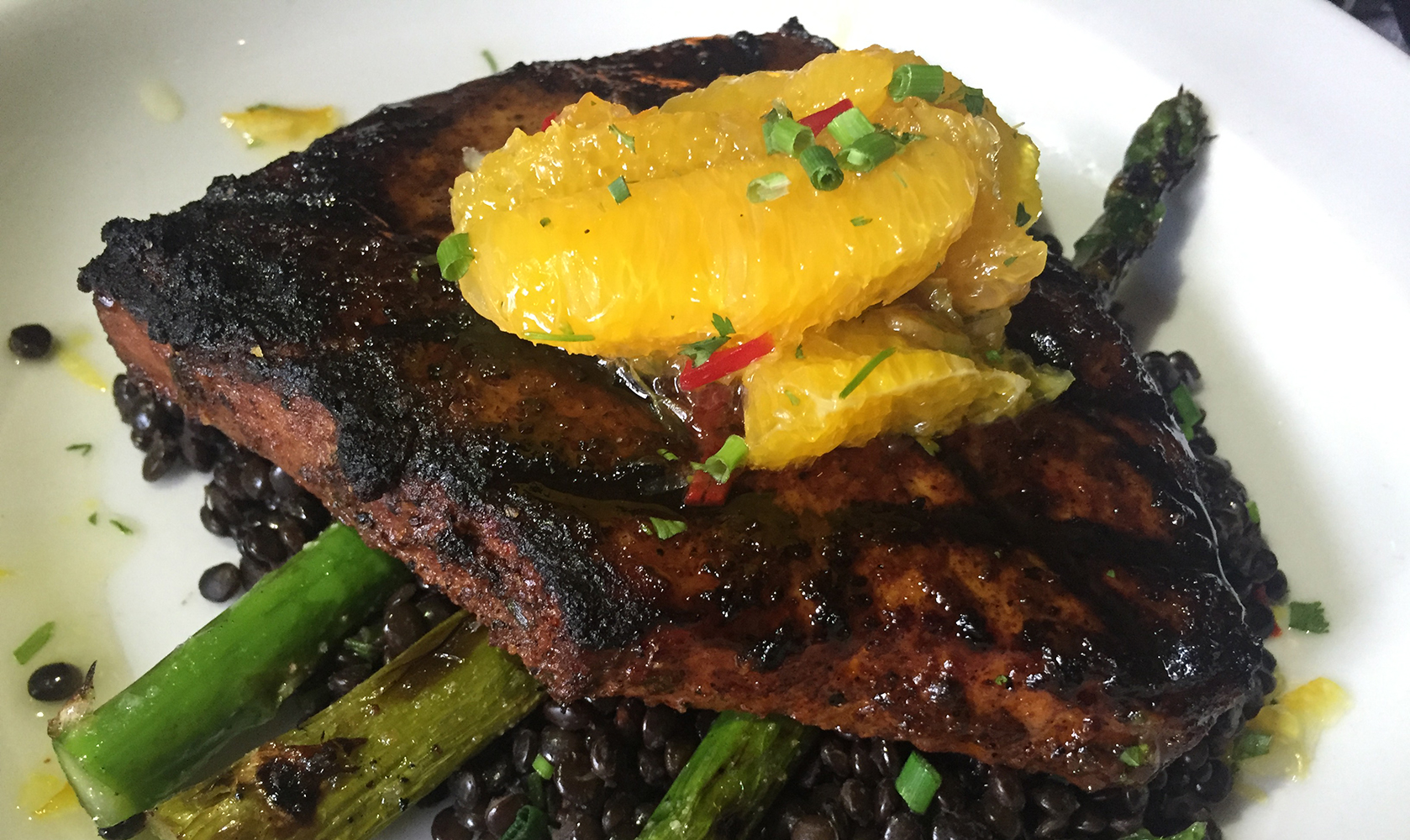 Found on his Specials Menu, our chef has introduced some exciting accompaniments to his charred swordfish steak. It is now served over a bed of Beluga lentils along with seared asparagus while still staying true to his New Orleans style with heavy blackened seasonings. 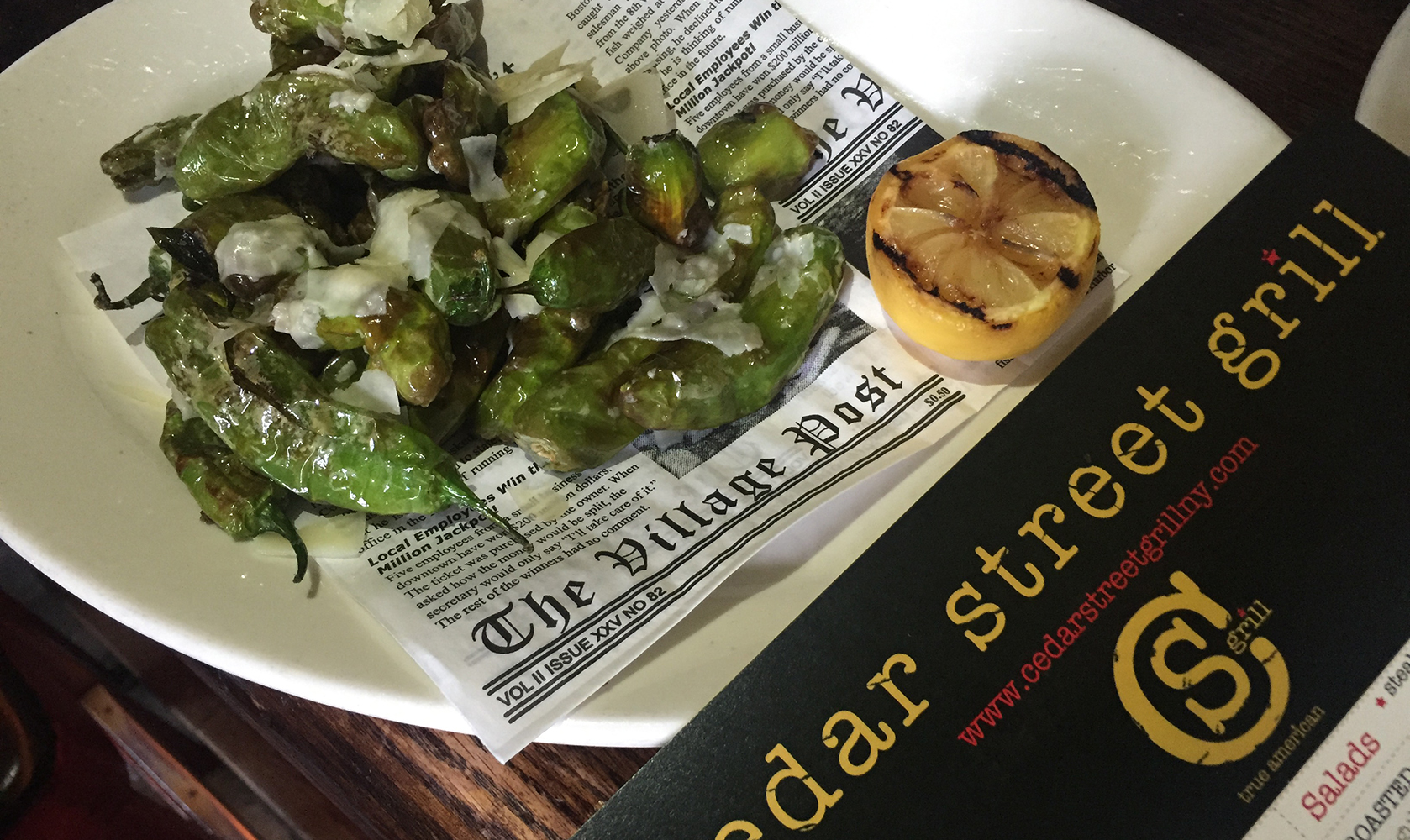 Many dishes at this gastropub are suited for vegetarians and makes the menu welcoming to all. The use of many seasonal vegetables are featured in many plates on the menu and are a great choice when you are looking for a quick bite. These blistered Shishito peppers are now served with shaved Parmesan, sea salt and a squeeze of grilled lemon for added brightness. 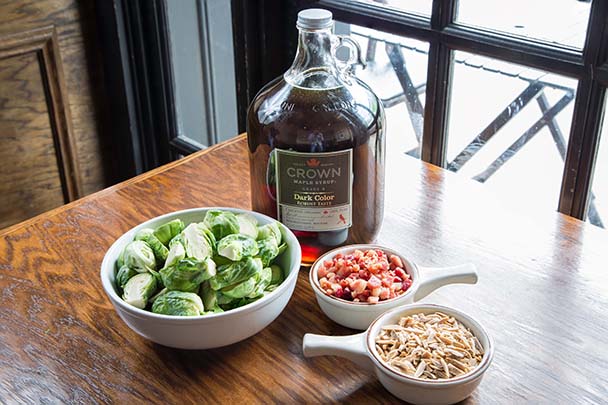 Several patrons were worried that their beloved, now famous, crispy Brussels sprouts with bacon, almonds, and a touch of local Crown Maple syrup would vanish, but fear not. If you have not tried them, RUN, as they are unbelievably addictive – so much so that the chef devotes over eight hours a week for prep on the sprouts alone! 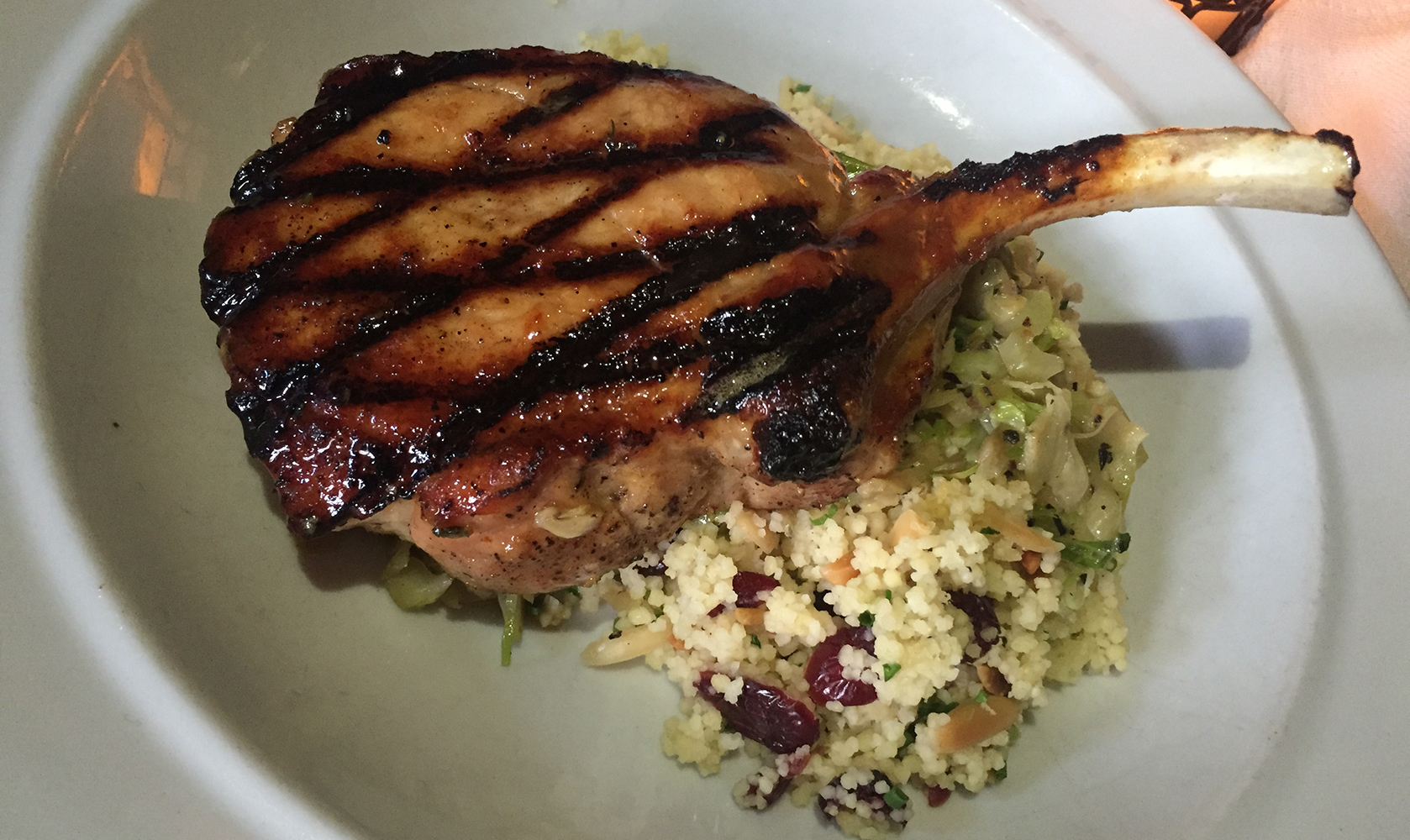 Although not necessarily deemed as “light” fare, this chef’s pork chop rocks. It is brined in root beer which keeps it very moist and tender. It comes with its own handle a la Fred Flintstone. Served over berry and nut couscous instead of mashed potatoes, it does have a somewhat lighter feel than a fall dish, so don’t rule it out.

This continues to be a hot spot for the brunch crowd. Many special breakfast offerings including; Hangover Sliders, Chicken with Waffles and egg dishes are featured. They now feature unlimited Mimosas, Bloody Marys or Bellinis offered in the prix fixe. There are a few tables outdoors.

CSG will be competing in the Burger Blast at the Kensico Dam in June. His burgers are some of the best in town, so head there to cheer him on against thirty other contenders or just stop into the restaurant to sample one soon.

Chef Matt will be teaching two new classes for WCC Taste of Westchester in his restaurant. Sign up for class with WCC at 914-606-6830 x1

On Tuesday, May 3, 5:30-7:30 pm, $15 t WCC + $25 sampling fee, class #13105 Chef Matt will demonstrate his talents with sweet corn and bacon fritters adorned with a pepper-berry aioli. Next a lesson on rolling and stuffing a pork loin with wild rice, currants, and almonds, served with a seasonal fruit chutney. For dessert, cookies and crème parfait – graham crackers, whipped cream, and the secret to his light and airy chocolate mousse. Then again on Tuesday, August 16, 5:30-7:30 pm, $15 WCC + $25 sampling fee, class #5724 he will teach N’awlins Cookin’ by demonstrating his talents with his New Orleans inspired fare. He will teach us to make mac and cheese fritters with a creole dipping sauce. Next a lesson on chicken and andouille sausage etouffee served with Carolina rice. A briny treat from the chef may be in the cards along with a mini education on something from the sea. Our cocktail education is on CSG’s famous summer beverage Ready Aim Fire made with serrano chilies and lime. For dessert, seasonal berries and house-made whipped cream. Come join us for a fun night!

As the program coordinator for Westchester Community College’s Continuing Education program, “A Taste of Westchester,” she designs more than 85 cooking classes each year by recruiting chefs for educational demonstrations in their restaurants. Donna is an experienced food writer, including sharing the “lessons learned” from her program. She currently holds a full time position in the education field and in conjunction with being an accomplished Market Research Professional, her skills have now translated to the food world. She focuses on food education, both by sharing cooking information and techniques, and by heightening culinary appreciation. Her former “Chef’s Tip” blog for LoHud Food shared special hints from the Taste of Westchester program. She also reviews many restaurants during Hudson Valley Restaurant Weeks. Donna also develops and contributes recipes for cookbooks and several recipes have been included in a new fish cookbook. She is an avid baker and a former cake decorator who created many custom designed specialty cakes. She can be found on FaceBook or Instagram for you to follow the food. Join her for a class!