All I can say about the new Polpettina in Larchmont is that it’s worth the wait. Yes, it took a few months longer to open (originally slated for September, it officially opened December 11th) and yes, there are still no reservations taken, meaning you might be standing by the bar awhile…but the food, the atmosphere, and the overall homey “keep-it-local vibe” make it a neighborhood gem Larchmont will no doubt embrace (and frankly, sorely needed). With Polpettina, we have what every corner of Brooklyn has: A nicely priced, attractive eatery where the chefs take the menu seriously, the prices are reasonable, and the cocktail program has been created to meld with the food.

First, let’s talk appearances. This place looks nothing like its previous incarnation of Espana. Instead, you’re greeted by a dramatic glass front, an enlarged (newly built) bar, and two communal tables that help foster the sense of community Larchmont prides itself on. Reclaimed barn wood lines the walls and Edison light bulbs hang from the ceiling, giving the place a rustic, simple feel. 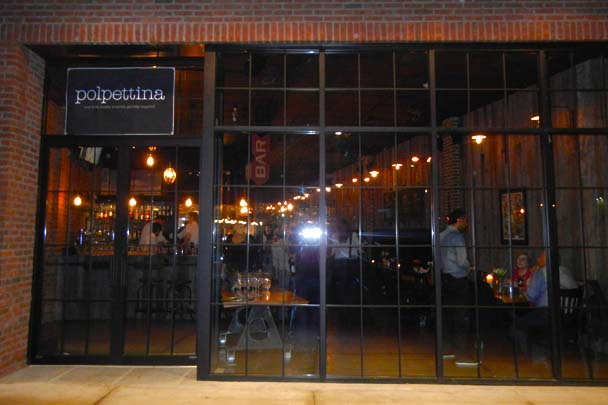 Second, the food. At the preview party, I sampled roasted brussel sprout leaves with a sour yogurt dipping sauce. There were also braised pork sandwiches with cabbage carrot kimchi. 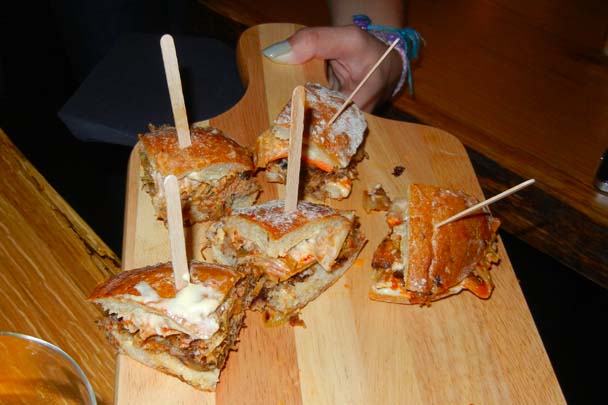 And, my beloved pizza, including their signature Fig, made with black mission figs, La Quercia Farms pancetta, goat cheese, arugula pesto, truffle honey, and their spot-on Grandma, a square pie with San Marzano tomato and roasted garlic (no cheese). The menu in Larchmont is the same as Eastchester, though there will be some new additions and specials. Note to Polpettina newbies: If you haven’t tried the super thin potato chip like eggplant crisps drizzled with local honey, do so. I don’t like eggplant and I LOVE these so much I wrote them up as a “BEST OF” Westchester Magazine winner. I’m also a HUGE fan of their meatballs, the “namesake” of the restaurant, as well as their thin Neapolitan pizzas. 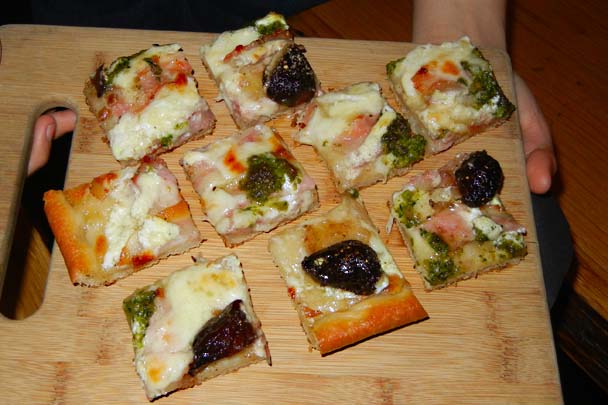 Cocktails are another point of conversation with original concoctions such as the Reverie (El Dorado 3 Year Cask Aged Demerara Rum, lime, pineapple, honey and mint) and the Gin Quince Old Fashioned (Bombay Sapphire East, quince syrup, house made grenadine and Angostura bitters). Of particular note: the oversized ice cubes artfully placed in certain cocktails which, aside from keeping the drinks cool, limits dilution. My husband’s Sazerac was a whiskey and bitters drink that’s quintessential New Orleans. There is also an expanded list of wines (think 12 to 15 by the glass, with an offering of approximately 75 bottles) as well as an emphasis on craft beers. 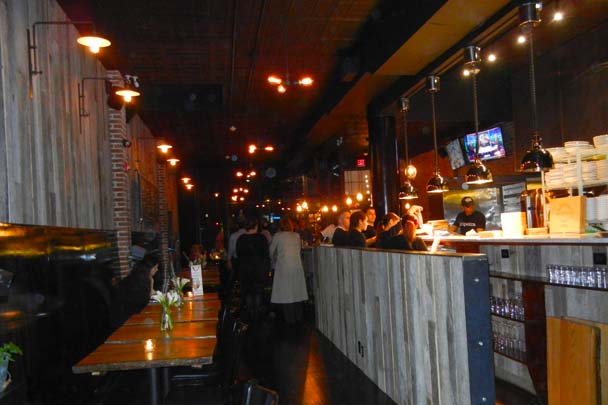 For now, though – even if you don’t order a cocktail – it’s just fun to watch the bartender mix a Barrel Aged Manhattan quickly flaming the orange rind to enhance the flavor as you sit and wait until your table is ready.

If you’re a coffee lover, you’ll enjoy the restaurant’s Blue Bottle coffee. As with their Eastchester location, brunch will eventually be served.