Join 914PopUps and IntoxiKate March 12th at 7:00 PM for The Premier Party, a three-course experience with food provided by award-winning Chefs Scott & Heather Fratangelo of L’inizio.

A progressive dinner is a dinner party with successive courses prepared and eaten at the residences of different hosts, with one course enjoyed at each location. At our Premier party, we will enjoy three-courses, as we move the three unique spaces at The Premier Collection’s stunning location in Elmsford—

Ticket: $100 per person including beverages + gratuity, plus EventBrite fees

The Next IntoxiKate Cocktail Club: Aldez Tequila at The Spread

Learn about the newest innovations in the spirits industry with IntoxiKate’s Cocktail Club! Meeting every third Tuesday of the month, this class combines a fun, social atmosphere with a part tasting-part demo “lesson” about a specific spirit, wine, or beer brand.

Our February meeting will be hosted Tuesday, February 18th at 7:00 PM at The Spread in Greenwich, CT. The evening’s spirit is Aldez Tequila.

Meeting at a different location each month, each class is dedicated to—

Whether you are someone who orders the same cocktail or entertains at home, drink outside the box! Expand your palate and try new recipes. Book now—limited to 25 spaces. 21 and over only!

*P.S. We eat, everyone eats. For every Club member ticket sale to an IntoxiKate event, $5 is donated to my heart charity, Feeding Westchester. There, the magicians and volunteers at work turn that money into $20 worth of meals to 1 in 5 people in Westchester County who are food insecure.

All That Sparkles: Galentine’s Day Event at Bloomingdale’s White Plains

Grab your girlfriend’s for a FREE Galentine’s Day event!

Join me at Bloomingdale’s in White Plains for a very special Galentine’s Day celebrating ‘All That Sparkles!’ Sip on sparkling wine while you admire Bloomingdale’s collection of dazzling accessories and enjoy food from new White Plains eatery Papi’ and sweets by Flowerbake by Angela.

Cocktail attire is welcome. {It is a party!}

When I first met Ellen Sledge, we found ourselves sharing a kitchen; she had just launched Penny Lick Ice Cream, and I was event planning for a caterer. At the time, Ellen was selling her old-fashioned, custard-based ice creams at farmers markets throughout the rivertowns, and you’d often find her pushcarts at popular food festivals throughout the county.

Fast forward to seven years later—Ellen, I can’t believe it’s been SEVEN YEARS—and she’s got a popular brick and mortar ice cream shop under her belt in Hastings-on-Hudson, an ice cream warehouse in Port Chester, and the start of what promises to be an incredible wholesale business. Her White Chocolate Black Cherry (pictured above) is still one of my favorites…

And while she’s leading the pack when it comes to small business food production in Westchester County, she’s able to lift her head long enough between packaging estimates and payroll to flex her creative muscle, coming up with delicious flavors while balancing her commitment to using all-natural, seasonal ingredients. (Check out my interview with Ellen on Fork This with IntoxiKate below.) 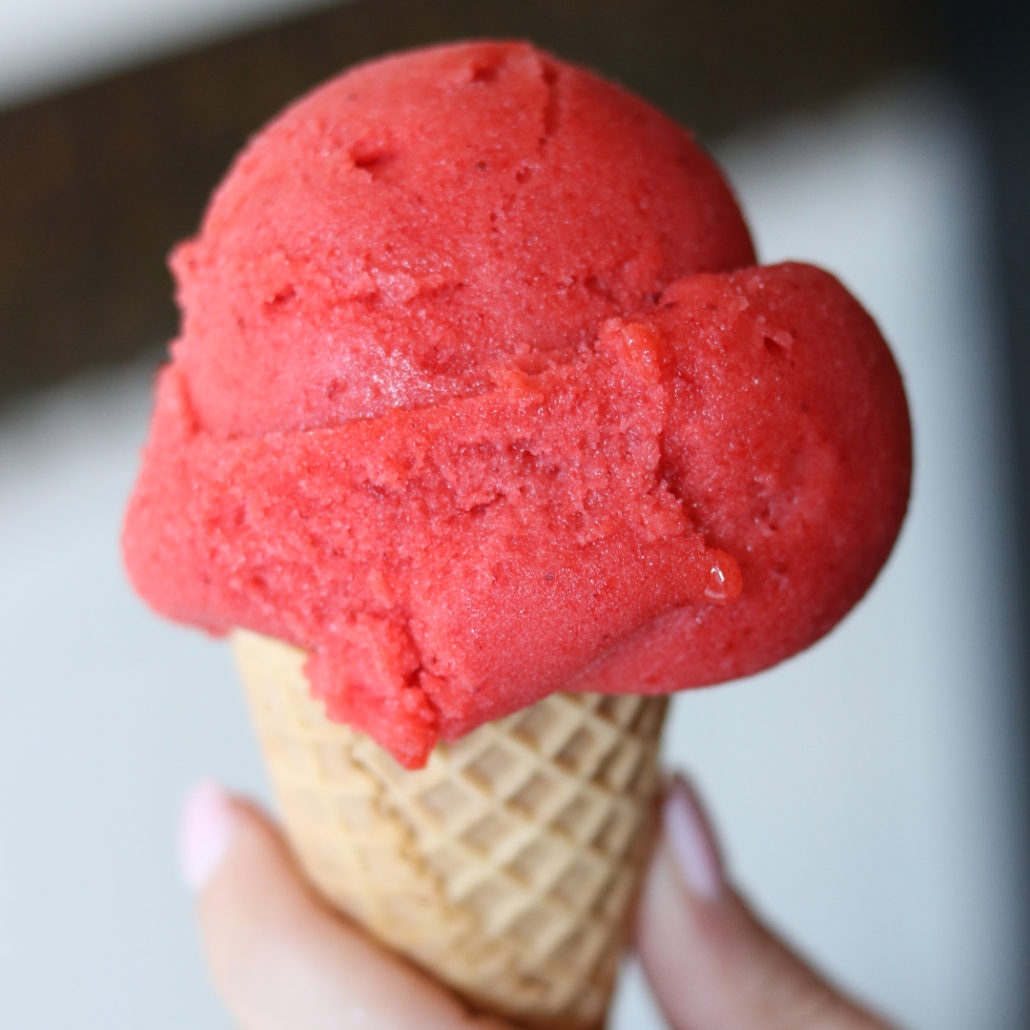 Exhibit A: Her sorbets and vegan ice cream flavors are amazing… Her Dark Chocolate Coconut ice cream has changed my life… #seriously. And while Penny Lick generally offers seasonal flavors, we are lucky there’s a little Strawberry Lemonade sorbet (above) left over to transport our tastebuds to summer days. 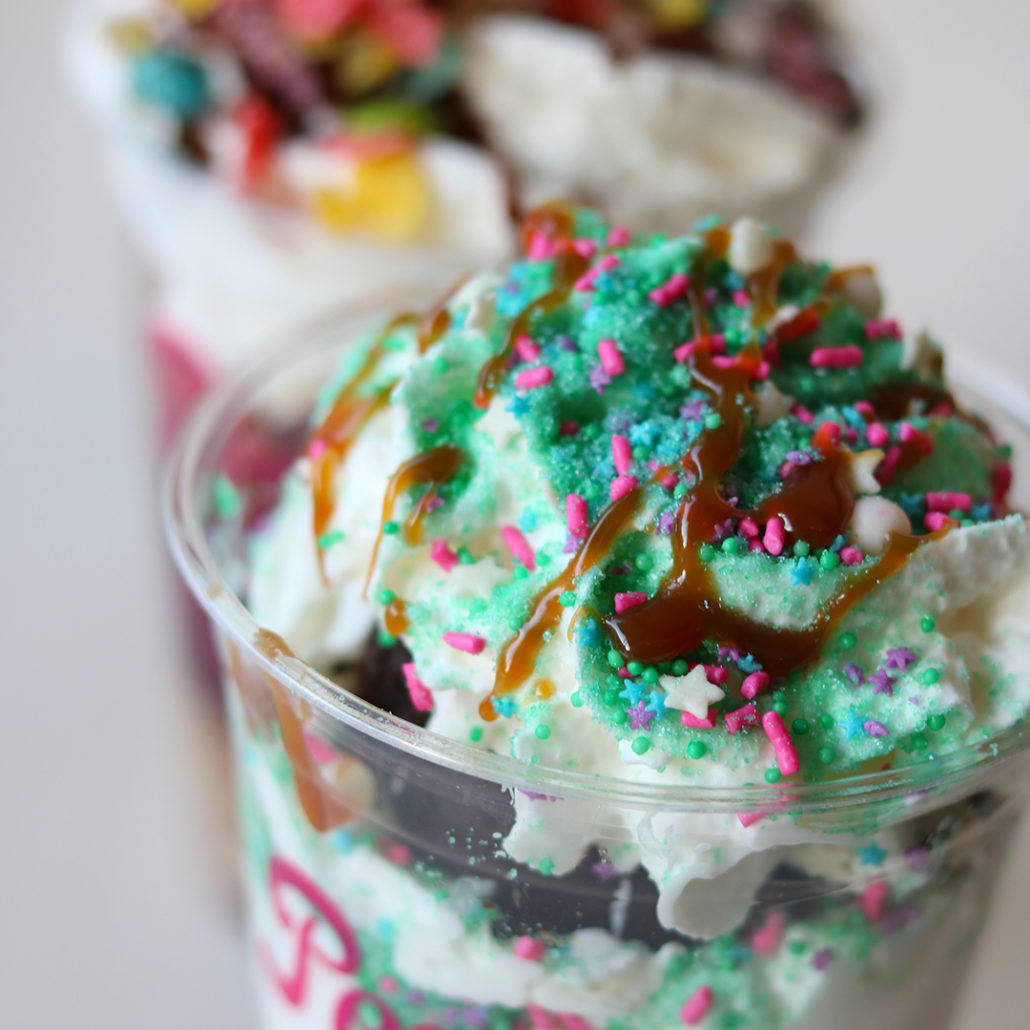 And if sundaes are more your thing, check out the variety of flavor combos, like this one with Raspberry Lime and Dark Chocolate Coconut ice cream, whipped cream made in house, unicorn sprinkles, and caramel sauce. (Because everyone needs unicorn sprinkles in their life.) 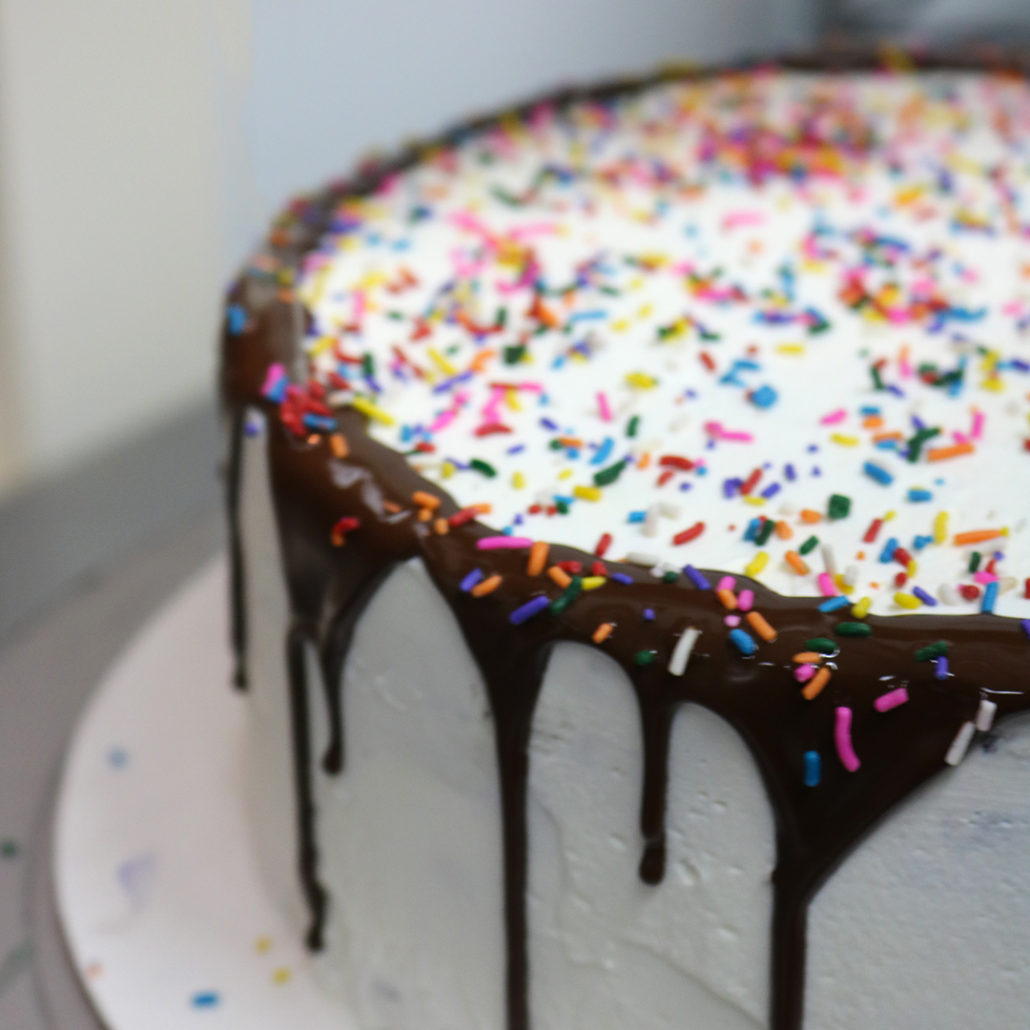 To top it all off, Penny Lick Ice Cream also makes custom ice cream cakes. My birthday isn’t until May, and I’ve ordered mine well in advance! Plus, if you have a little ice cream lover in your house, consider throwing a birthday party at Penny Lick where party-goers can learn how Ellen makes her signature sweet treat. (For those on allergy-awareness, Penny Lick is peanut and tree nut free.)

The first IntoxiKate Cocktail Club—a celebration of the spirits, wine, and beer industry—kicked off earlier this month with a look (and taste!) of Legent Bourbon at The Rare Bit in Dobbs Ferry.

After an introduction to the East-meets-West Bourbon—Legent is a collaborative effort between Fred Noe, Jim Beam’s master distiller, and Shinji Fukuyo, Suntory Whisky’s chief blender—guests got a taste of this rich, cherry spirit with a hint of sherry on the finish.

The next IntoxiKate Cocktail Club is February 18th at The Spread in Greenwich, where we’ll explore Aldez Tequila, a certified organic product from the lowlands of Jalisco. This event sold out fast in January, so get your tickets now! 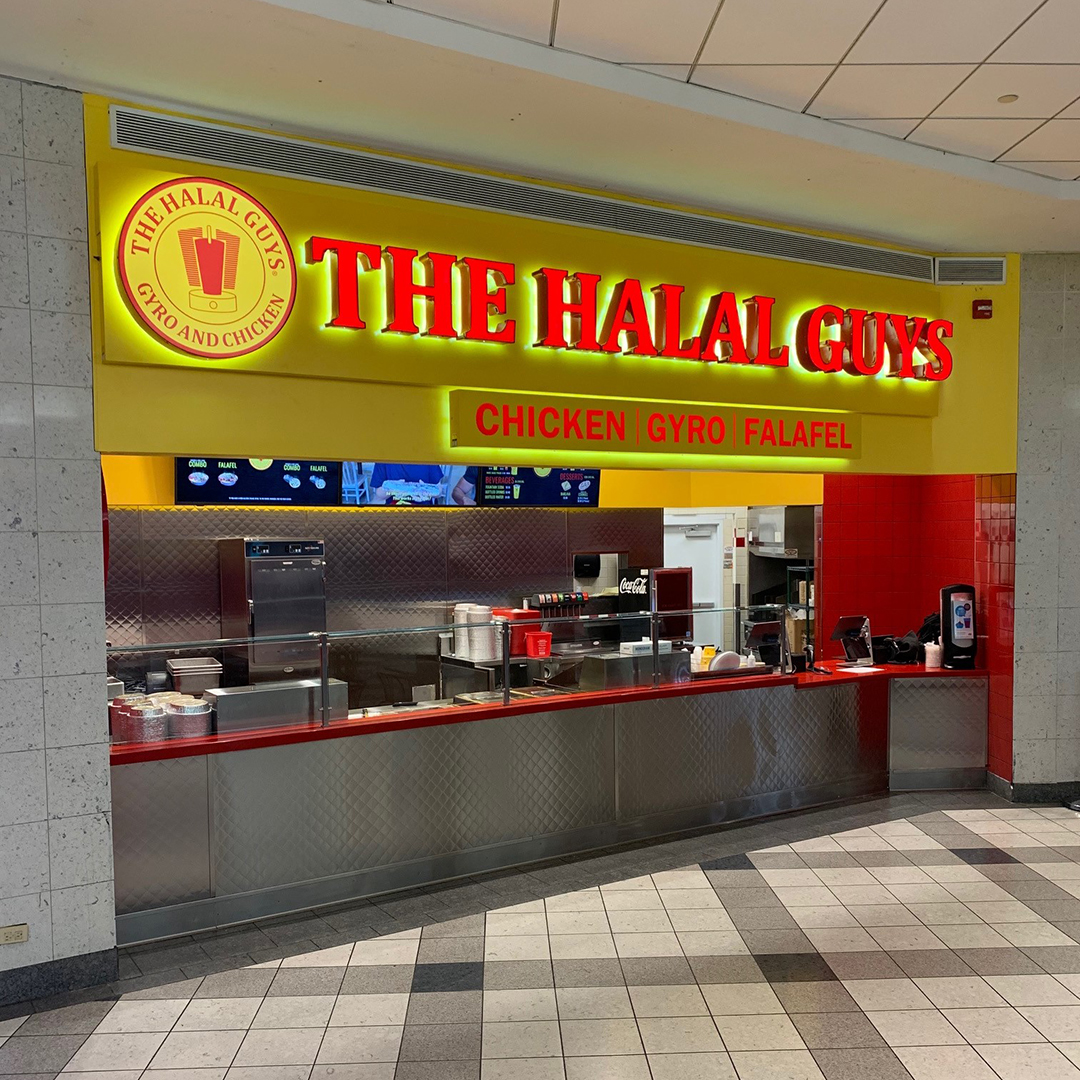 Halal food fans will no longer have to take a train, fight mid-town traffic, stand in city block-long lines or even be in New York City to visit crowd favorite, The Halal Guys.

The wildly popular brand that started 25 years ago with a humble food cart and evolved into a New York culinary sensation  is “parking” permanently in White Plains at the Galleria mall at 100 Main Street in the heart of downtown.

The Halal Guys celebrated the grand opening of its newest and first Westchester County location with a ribbon cutting ceremony Saturday, January 18 in the mall’s food court.

“We are thrilled and excited to bring New York’s favorite ‘street’ cuisine to White Plains, which has waited patiently for our arrival,” said Jack Yeung, owner of the soon-to-open restaurant. “Our flawlessly cooked and seasoned Mediterranean menu is just what this diverse and discerning community is looking for.”

Galleria General Manager Josh McCord welcomed the addition to the mall’s dining options. “The Halal Guys bring not only a fantastic array of food choices, but a unique level of excitement. The vibe is great,” he said. “We know that many Westchester residents already know what the excitement is about from eating at locations in Manhattan and elsewhere. We look forward to providing a venue for them, as well as everyone who’ll be experiencing The Halal guys for the first time.”

Known for its top-secret sauces, including its famed yellow packets of “white sauce” and its super-super-hot sauce, The Halal Guys has become something of a cultural phenomenon, even inspiring Reebok to launch a specialty sneaker in its image.

White Plains will enjoy its signature bright yellow-and-red décor, along with The Halal Guys menu of combos and platters–the bestseller is gyro and rice over salad–and pita sandwiches, including chicken and falafel, and extras such as humus and baklava.

At the Galleria, the approach will differ slightly from its Manhattan origins by offering fresh toppings not available at its food carts. The pricing will differ accordingly. itself so quickly, you immediately want more. It’s the white sauce, always the white sauce, that draws everybody in.

This press release was supplied to IntoxiKate.com.

I am extremely humbled to be joining a panel of incredible women Thursday, January 30th at 6:30 PM for the Dynamic Women of Westchester event, hosted by Lord & Taylor in Scarsdale, NY.

Alongside some of my favorite people—Ana Mantini, Associate Publisher of Westchester Home; Sarah Stefanski, Co-Founder of the Marigold App; and Susie Mordoh, Event Planner, Life Coach + Speaker at Susiemordoh.com—we will offer career advice and personal experience through a Q+A panel.

The event also includes a “What to Wear to Work” fashion show showcasing styles such as business formal, business professional, business casual, and casual. There will be light bites, refreshments, music, enter-to-wins and so much more!

Hope to see you there!

Enjoy the Part-Time Love (best cocktail name ever), made with gin, strawberry, hibiscus, and lemon during Granita’s Happy Hour, running daily from 4:00 to 7:00 PM.

One of my favorite apps? The Wood-Fired Meatballs with pomodoro, creamy polenta, and basil pesto.

I loved the flavor of the lemon-saffron smoked mozzarella Arancini.

When you walk in, the aroma coming from the wood-fire is intoxicating. The chefs at Granita offer a variety of wood-fired pizzas like this Soppresata pie without tomato sauce, mozzarella, parmigiano-reggiano, fresh oregano, and fresno chili.

Pastas are also a plus—at the top of my list is this Short Rib Ragu Gnocchi.

January 25th marks the Chinese New Year, and 2020 celebrates the Year of the Rat. While you may recoil at the thought of the rodent (or maybe, with the popularity of Pizza Rat, you may be having a laugh), in Chinese culture, rats were seen as a sign of wealth and surplus.

For the second year in a row, Chefs Navjot Arora and Rikhi Pandeya have worked together to create a special menu—full of ingredients specially curated for their lucky associations—at Sambal Thai & Malaysian in Irvington. The Chinese New Year menu (listed below) is available for dinner service January 15th to 31st.

Learn about the newest innovations in the spirits industry with IntoxiKate’s Cocktail Club! Meeting every third Tuesday of the month, this class combines a fun, social atmosphere with a part tasting-part demo “lesson” about a specific spirit, wine, or beer brand.

Meeting at a different location each month, each class is dedicated to—

Whether you are someone who orders the same cocktail or entertains at home, drink outside the box! Expand your palate and try new recipes. Book now—limited to 25 spaces.

Our January meeting will be hosted Tuesday, January 21st at 7:00 PM at The Rare Bit in Dobbs Ferry. The evening’s spirit is Legent Bourbon.

Legent™ is a Kentucky straight bourbon whiskey partially finished in wine and sherry casks. But it’s more than that. It pushes the boundaries for how bourbons can be created while remaining true to the core of bourbon’s principles. It’s a collaboration between two whiskey legends – Fred Noe & Shinji Fukuyo – and two unique styles of whiskey making.

About The Rare Bit

The Rare Bit is a neighborhood restaurant with something for everyone. A welcoming place with a bit of food, a bit of booze and a bit of fun.
GO: 23 Cedar Street, Dobbs Ferry NY 10522, 914-693-8000, therarebitdf.com

*P.S. We eat, everyone eats. For every ticket sale to an IntoxiKate event, $5 is donated to my heart charity, Feeding Westchester. There, the magicians and volunteers at work turn that money into $20 worth of meals to 1 in 5 people in Westchester County who are food insecure.